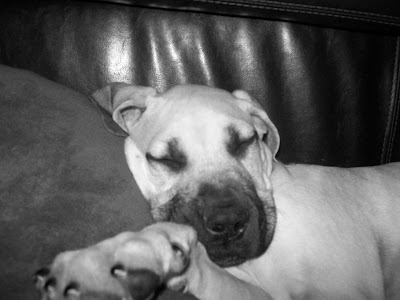 Our breeder said: "make sure you enjoy your puppy while you can because they grow fast". With Boerboels this is especially true. Africa is growing very fast. It is very important to teach your tricks and command words now. They may seem like they are not listening or learning, but they are. I can tell with Africa that she is becoming more obedient each day as long as I am consistent with the words and training. We review the tricks we want her to learn rewarding with a treat every time she does something right. This will definitely pay off when she is older and much bigger. We also believe that exercise is key for a good dog. We can't take her too far, but short walks make her much more obedient and calm
Posted by Kasha at 2:57 PM 2 comments: 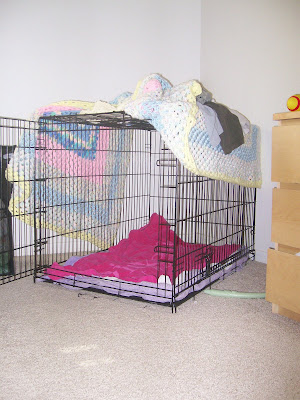 Crate training is a bit tedious, but definitely worth it. We learned with Tonka after 3 long nights of barking that he would do better in another room where he couldn't see us. With Africa, we learned after a long week of barking in another room that she would do better in our room with us in the crate. She has the peronality that she wants to be around us all of the time. I did have to put a blanket over the front so she couldn't see us get up and want out all through the night. After a week or so of lots of barking she has become quite comfortable in her crate. Everytime we want her to go in her crate we say "in your crate" and once she steps in we give her a treat. After a few weeks of this I can say "in your crate" without a visible treat and she well step in. This makes it easy to leave the house at anytime and not worry about the house being chewed up while we are not watching. It becomes a place for her to wind down and take a break from us as well. I do have to take her out in the middle of the night, but that becomes less and less. Dogs try their hardest to not have accidents in their crate. This is also a bonus with a crate. It definitely pays off. Also when we go on trips we can just take the crate and know that she feels comfortable even in a different place.
.
Posted by Kasha at 4:58 PM No comments: 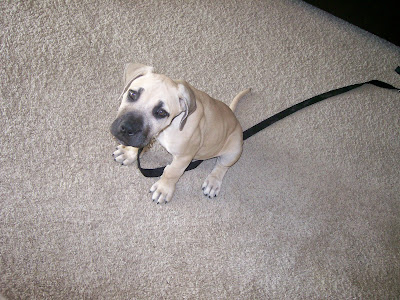 Here we have Africa learning the leash. This is a bit of a challenge. When there is tension on the leash she immediately sits down and does not want to go anywhere. So we connect the leash to her and just let her walk around for an hour or so a day with it just dragging around. We don't pick it up or pull on it so she can get comfortable with it. She is becoming more comfortable each day. Eventually we will try walking again.
Posted by Kasha at 12:52 PM 1 comment: 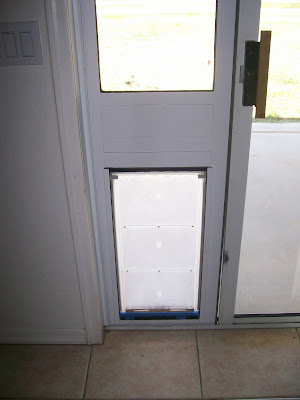 A pet door makes housebreaking so easy. It was a trick at first to get Africa comfortable going through the door. It helps to have a pet door larger than our house. In our case we could crawl in and out through the door and give her a treat if she followed. Eventually she became comfortable enough to go in and out herself. If you are crate training like we are, you may also be able to put the crate up to the doggy door at night and then your puppy can go in and out only through the dog door and that will reinforce where the defecating takes place. This worked brilliant for Africa until she somehow was able to push the crate away from the door and escape into the house.
Posted by Kasha at 12:41 PM No comments: 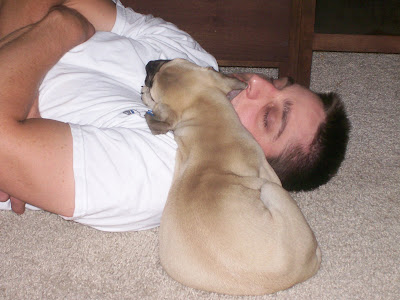 The very first thing any puppy needs to learn is housebreaking. Of course there will be accidents, but if there is constant observation the amount of accidents will be reduced. When a puppy walks around slowly with their nose close to the floor it is a good indication they are about to pee or poop. You should start by constantly taking or inviting the dog outside. This will help them learn quickly that there is an outside for relieving. As soon as any relieving is done praise the dog and give her a treat.  Africa seemed to learn this pretty quickly. We just kept putting her outside in hopes that she had to go and every time she went we would immediately give her a treat. When we weren't watching like she would and found her crouching to go in the house we immediately swapped her bottom and carried her outside. Again when she went outside we gave her lots of praise. If you miss the accident it doesn't do any good to get after the dog. They don't remember which is why you have to catch them in the act or just clean it up and hope to catch your dog next time. We figured out that Africa would get lazy and sleepy after a nap and we had to guide her or take her outside otherwise she would tend to have an accident.
Posted by Kasha at 6:34 PM 1 comment:

Introducing Africa to another new member of the pack. 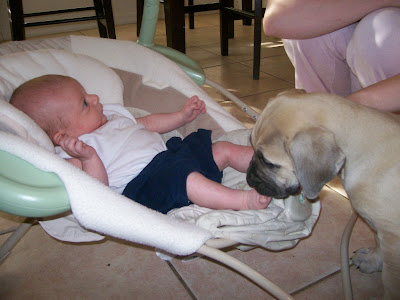 Africa is only three days older than our son Jack. Jack is our first child and although it is crazy and somewhat chaotic to have a baby and a puppy, we believe it will be a rewarding experience for Jack as he gets older to know that he is growing with his dog. Also, we wanted Jack to be established as a higher leader in the pack than Africa. It is important to establish leaders and dominance from the very beginning, especially with a large breed like this. She will quickly grow into a dog that is 150-200 pounds. You want to make sure she is going to listen to all the humans in the household. We let her sniff Jack, but established some boundaries like she was not allowed to climb into the chair or lick him too much. Licking often leads to puppy gnawing. That is not okay for our baby or for us. The biting on flesh however soft needs to be stopped from the beginning. Lots of chew toys are needed to help the puppy get through this phase.
Posted by Kasha at 11:28 AM No comments: 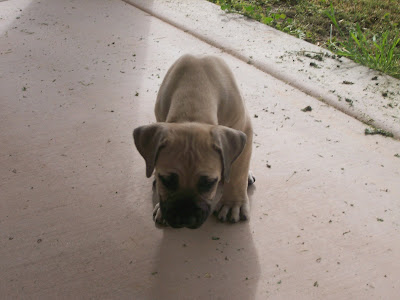 The first day is always exciting. Africa was about 8 weeks old when we brought her home and immediately set off to get to new her new territory. Her moments of exploration were brief as she was still young enough to want lots of naps. The sleeping is my favorite part, but it is so brief. She seemed so innocent and lethargic. The breeder said to enjoy this cute small size as much as possible because they sure do grow fast.
Posted by Kasha at 11:23 AM No comments:

The Boerboel is not a breed widely recognized in the U.S. as of yet. It is said to have the best features of a mastiff such as great power and strength, loyalty, the desire to protect it's family, and physical appearance. The Boerboel is a large powerful dog that has been breed in Africa since the 16th century. It is from a combination of various Mastiff breeds in Europe combined with those of Africa. The boerboel is said to be physically built better than other Mastiff-type dogs. This breed is very popular amongst African Farmers. Not only are they great working dogs, but the Farmers mostly used them to guard his family while he was away. They can be very protective, but loving and kind to friends and family. It's physique is intimidating alone in combination with it's deep bark they can be the perfect guard dog. However the boerboel's unique and adorable features are sure to draw attention no matter where they go. We got our dogs from  Arizona Boerboels. See their link here.
Posted by Kasha at 10:59 AM 1 comment:

Where it all began 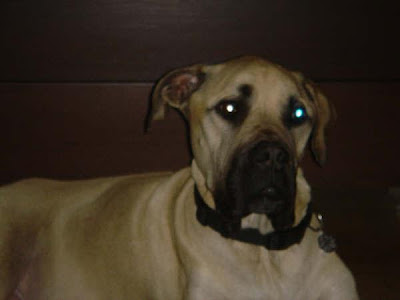 What is the perfect dog for us? A boerboel. We discovered the breed Boerboel one day while searching the internet for a large, protective breed, but was great with kids and very loyal. The description of the Boerboel almost fit perfectly.  This breed originates from South Africa and we were lucky enough to find a local breeder here in Arizona that actually brought himself and dogs from Africa. The day we brought Tonka home was a great day. He was this adorable puppy that made us happy just by looking at him. My husband and I couldn't wait to get home from work to play with our puppy. Of course there was the potty training and the chewing on everything like puppy's do, but it was all still fun. We studied the Dog Whisperer, read Dog Training for Dummy's, and any other book we could find on raising a large breed puppy. We thought we did pretty good training Tonka. He got attention everywhere he went and impressed people with his obedience and loyalty to us. Then one day he starting walking differently. We were afraid we had walked him too much that day or that he had injured himself somehow. We took him to the Vet who said he was afraid this was the beginning of a neurological problem. He was too young for the tests needed for diagnosis, but it appeared that something was wrong his spinal column and he was perhaps not getting the signal to walk the way he should.  His ability to move became worse and worse and one day at the park led to a meeting with a Vet walking her dog. She said it looked like he had Wobbler's Disease. Wobbler disease is a condition fo the cervical vertebrae that causes unsteady wobbly gait and weakness in dogs and horses. There is no cure. Eventually he would be unable to move and his quality of life would be such that putting him down would be the only option. It was nice to know what was finally wrong with him, but awful to know his days were numbered. We made the most of his short life.  We loved him unconditionally and said our goodbyes one sad day in the spring of 08. He had lived for only 18 months, but he left an impression on us that would last a lifetime. After several months of mourning so to speak and a move to a bigger house and bigger yard we decided to get another one. Thus begins our journey of RAISING AFRICA.
Posted by Kasha at 10:32 AM 6 comments:

Newer Posts Home
Subscribe to: Posts (Atom)
We do not claim to be expert dog trainers, but we do feel that our experiences will be helpful and entertaining. We especially hope this is helpful as there is little info on training boerboels specifically. We recommend you read from the beginning for the full experience.