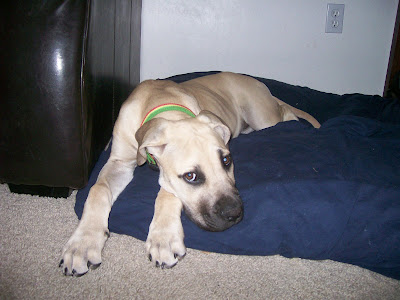 After telling Africa to "go to bed" a thousand and times and rewarding her with a treat every time, she has finally started to go to her bed on her own. I really appreciate this because she already takes up a lot of space on my floor.I like her to be in her corner out of the way. She is only 4 months old and is 35 pounds. She is more than twice the weight of our son who is also a big boy and was born at the same time. She amazes us! 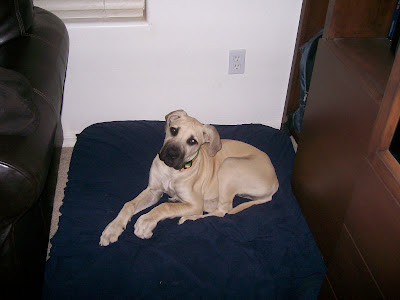 Please remind me why we got this dog! 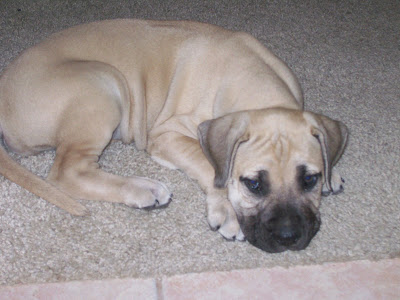 The picture of the first day we got her helps, but I woke up today and needed a little reminder as to why I got this puppy. I am a new mom and still have to get up every three hours to feed our boy. At 2 in the morning I woke up to a stinky mess in Africa's crate. Despite her relieving herself before we put her in her crate like we always do she decided to have an accident big time in the middle of the night. I have replaced 3 pacifiers, lots of new diapers, some baby clothes, a bottle, and who knows what else is yet to be noticed as missing. So I bring you a quick story why we thought she would be good to have with our kids.
We were sold on this breed when my husband heard that a Father and his son were in an outdoor shopping center with their boerboel and the story goes that the Father had to step inside of a store for a few minutes that did not allow dogs. A bystander observed the Father perhaps jokingly telling the dog to take care of his son even though the son was around 6 or 7 years old. The bystander then observed a mischevious fellow zoom in on the abandoned child and begin to approach him. As soon as the dog saw this he got up and layed on top of the child without taking his eyes off the suspect. This of course deterred the individual and he kept walking. The person who observed this occur went up to the Father when he returned, told him the story, and asked what breed the dog was so he could get a dog like this himself. We have also heard from another boerboel owner that their dog would walk around the edge of the pool when their children were playing by the pool as if to make sure they would not get near the edge or fall in. I guess even though Africa is driving me crazy destroying my son's things now, she may be helpful with him later.
Posted by Kasha at 7:28 PM 5 comments:

Africa gets some bling! 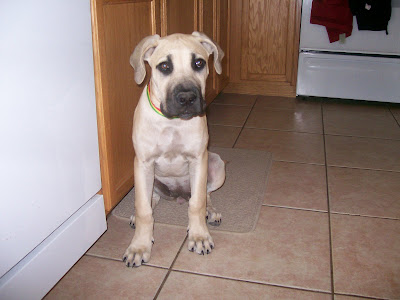 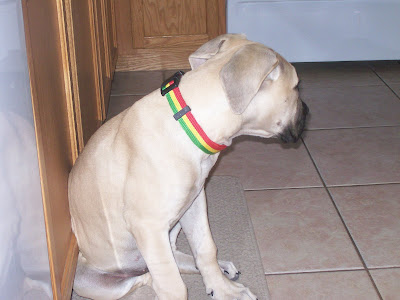 ....A new collar that is! We were pretty happy to find this collar with matching leash to make Africa's outfit complete. She should make her country proud. I will say it is nice that she is finally used to her collar and is almost perfect for walks. We still take treats along and reward her periodically for walking next to us or behind us, but never for pulling on us. She will still just stop walking and resist us briefly, but once we say "come" she is back on her feet.
Posted by Kasha at 3:13 PM 8 comments: 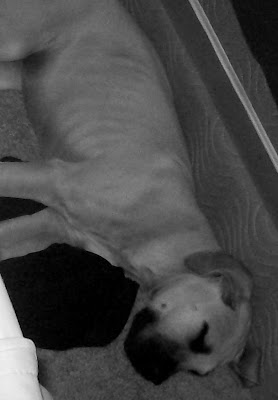 I love it when she sleeps. Here she sleeps near my side of the bed. She would really like to sleep there all night, but I don't trust her enough yet to let her out of her crate at night. I would recommend using the crate for 5-6 months as the boerboel grows to avoid accidents. It is also great to allow the puppy to learn to love the crate. When we go on trips, Africa will feel ok with being in a strange place since she has something familiar like her crate! I also would like to pass along with this sleeping post that when you find your puppy sleeping and possibly having a dream or something that is making her thrash and yelp in her sleep, the vet says not to wake her up. I feel bad if she is having a bad dream, but she is fine and should not be disturbed.
Posted by Kasha at 9:13 PM 2 comments: 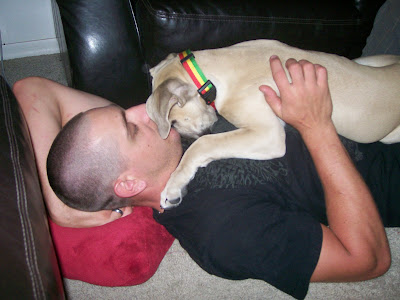 Boerboel puppies are so cute and cuddly. It is always tempting for puppy owners to invite puppies to sleep in the bed at night or up on the couch while watching t.v. If we don't do anything right with our training as long as we keep her off of our furniture no matter how cute she is, that is pretty good. When she is 150 pounds plus our efforts to keep her off our furniture will of paid off big time. Even if you let your boerboel get on the couch once, she will never forget and you will find yourself fighting that forever. Here we have Josh getting down on her level. It may seem annoying to have to get on the floor to cuddle with your dog, but I would recommend it for the future of your bed and couch.
Posted by Kasha at 11:13 AM 1 comment: 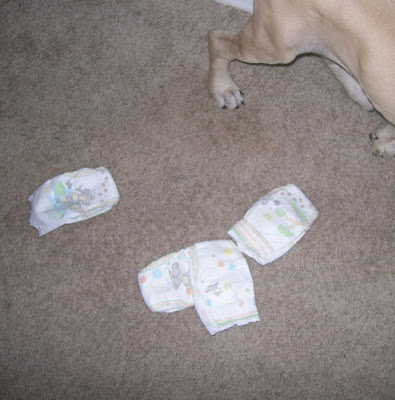 So our son seems to provide the most temptation for Africa. Here we see evidence of one of the biggest temptations- diapers. This made me laugh because I could here rustling in my room and then I remember I left a new bag of diapers next to the changing table. Sure enough Africa came trotting out with not one, but 4 diapers in her mouth. I cut her off right before she took her new goodies outside and she of course immediately dropped them at the sight of me. It is almost hard to deny her such things, but if we allow it once, she will eat us out of a house.
Posted by Kasha at 11:05 AM No comments: 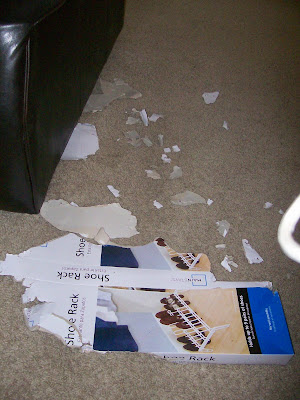 I realize it is not a a Newsflash that puppies like to destroy things. Africa likes to take big things and turn into several little things. The best kind of toys for dogs are the things that are not meant to be toys for dogs. We buy Africa lots of toys and she is mildly amused for a day and then she hunts for things left around that are not meant for her to play with. I think it would be a good idea to not buy lots of toys for your dog at once, but rather to space them out. Introducing a new day every so often is a better idea then several toys at once.
Posted by Kasha at 10:57 AM 1 comment: 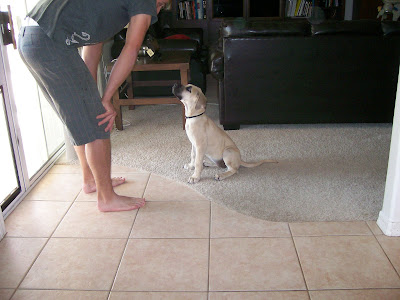 I love this picture because it depicts how a dog should pay attention to the pack leader. She is eager for a command. A dog that is distracted and doing there own thing while you are expecting them to do something else is not good. Even at this young age we expect her to always be looking to please us and not herself.
Posted by Kasha at 9:03 PM No comments:

Africa needs her own country 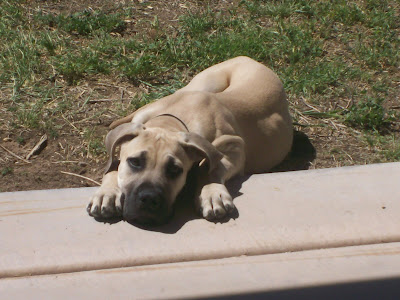 Africa loves her big yard. We are situated on about a half an acre and this little ol thing explores the entire lot! She loves it. With a large breed it is definitely recommended to get a big yard. I have found her chewing on the stucco of our house so she still needs supervision even though she has a lot of space. This breed needs lots of room to get her energy out and lots of appropriate chew toys. We don't have the best of grass yet and I hope we do soon because she seems to love other yards with grass.
Posted by Kasha at 7:34 PM No comments:

The trouble with the perfect toy 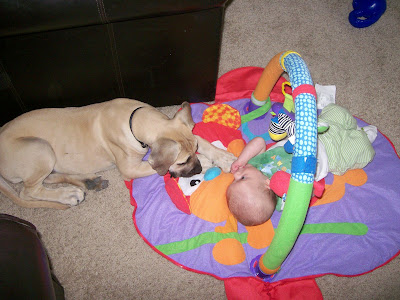 Africa is learning quickly the meaning of "leave it", but she considers Jack and his toys to be the "perfect toy" and has a hard time resisting. I don't want Jack to be subject to the dog so I am always reminding her to leave him alone. She just wants to lick him like crazy. When he cries she will go and sit and stare at him and then back at me as if to say "do something!" Puppies like this need lots and lots of toys. When she gets a toy that is not her toy, I tell her to drop it and I quickly replace it with one she can have.
Posted by Kasha at 5:16 PM No comments: 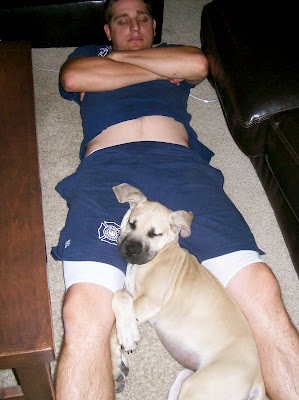 So part of the reason we got this dog was to protect us while my husband is away at work. This leaves me with a baby and a dog to essentially raise most of the time on my own. Therefore, I am the one doing the majority of the training with Africa. This means I am consistently telling her "down", "leave it", and "drop it" all day long. She is always trying to jump up on things, getting into things she shouldn't, and of course occasionally she is successful at getting things and begins to devour whatever it may be. So I feel like the bad guy. Since she is a puppy, she is in to everything. I feel like I am yelling all day. It isn't fair when Josh comes home and these two become instant buddies followed by a good ol nap together. Sometimes it isn't fair, but hopefully we will have a good dog in the end.
Posted by Kasha at 11:23 AM 1 comment: 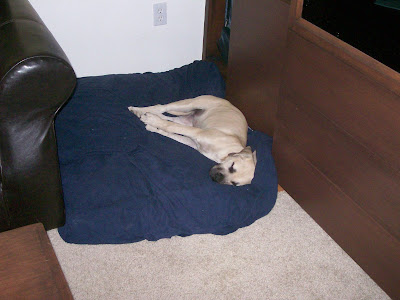 This is my favorite command. Africa is going to get big and will be in the way when company comes and what not. It is nice to have a place where she can go and still be part of the family. We teach this by saying "go to bed" and then placing her on her dog bed and rewarding with a treat. If she is standing close to her bed we do this again. Eventually she learns what "go to bed" means and yet still for quite sometime we continue to give her treats everytime she obeys "go to bed". As she gets older we can say " go to bed" and she will go and lay down on her bed and she will learn to love it. With Tonka that became his favorite spot. It was his spot and unless we were petting him, he was undisturbed there. I think with Africa this will be good having our baby eventually crawling around. Hopefully she can get a break from him now and then with this bed. She of course gets the biggest size dog bed. They usually come with a removable, washable cover. I would recommend covering it with an extra sheet that you can simply remove and wash. I learned this is much easier than removing the cover.
Posted by Kasha at 11:09 AM 1 comment:

Labels: Commands, Dog Beds
Newer Posts Older Posts Home
Subscribe to: Posts (Atom)
We do not claim to be expert dog trainers, but we do feel that our experiences will be helpful and entertaining. We especially hope this is helpful as there is little info on training boerboels specifically. We recommend you read from the beginning for the full experience.