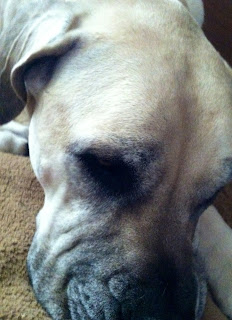 We have all been there. You wake up from sleeping in an awkward position and your back and neck hurts. Or the clouds roll in with signs of rain and your knees start to hurt. The latter happens to me often actually. Well, joint pain is just as common in pets as it is in humans.

Let's talk about Africa. As you will recall,  I was worried about Africa needing a very expensive surgery. ACL surgery is around $2500 dollars per leg and we thought Africa might need them both done. It has been well over a year and she is doing great without the surgery.

It seems that while her diagnosis was that her ACL was torn, her recovery has led us to believe that it could have simply been her joints. A dogs joints works very similar to ours. Our joints can hurt with a change in the weather such as rain just like it can for dogs. Similarly, as joint pain worsens, the tendons, muscles, and ligaments can be damaged or in pain as well. This could have easily been the case with Africa.

Our dog's extreme limping, lack of desire to get off her bed, and overall immobility led us to believe it was something that could only be helped with an invasive surgery. I now believe that keeping her resting and with the help of glucosamine she is healed. Joint aid for dogs is a much better treatment to start with than surgery. We gave her two tablets a day to start which had a combination of glucosamine and chondroitin. These two nutrients are the foundation for ease of discomfort and ultimate healing of the joints. There are lots of great brands of glucosamine out there.  I would definitely recommend trying this treatment plan first before any surgery, especially when dealing with a dog as large as Africa. Glucosamine will also help with arthritis in dogs, which is quite common. In fact, the vet has said that Africa may be heading in that direction even at her young age.

All is well at our house and next post I would like to talk about two new arrivals at our house. In the meantime, perhaps we can teach Africa how to skate on our bamboo longboards since she is up and ready to get moving. In fact, she is better than ever.
Posted by Kasha at 9:55 AM 21 comments: