$25 dollars and some change 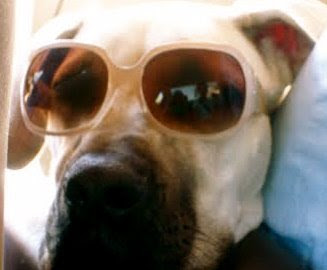 What does 3 Frisbees, a dog leash, an orange juice container, and a few bruises have in common?

We are back from a great vacation spent with family in Utah. Africa was a fantastic little traveler for the 12 hour drive, but a bit of a disaster once there. $25 dollars is what we owed family for chewed up items, and "some change" is what is going to occur around here as far as her training goes. I am sure you all can relate when I say that perhaps I have gotten wrapped up in other things and have neglected to spend time training Africa DAILY.

Here are some goals:
(Yes Africa does get a little slack since she is still just 6 months old)

- work on jumping up on people
- work on barking
- work on more exercise so the above does not occur.

Other than that we are happy to be back and have missed you all four legged or two! 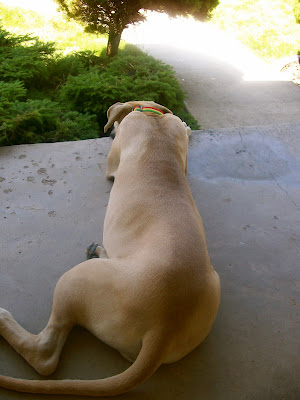 Perhaps a thank you is in order 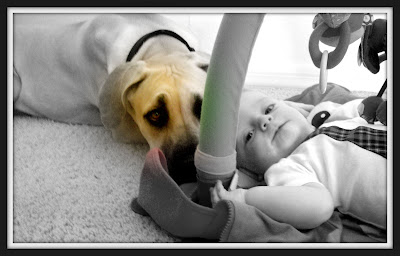 It happened. That moment where you are sitting on your couch at night alone with just the baby and the dog and you hear the rattle of the front door handle. This has never happened to you? Well thank goodness. It isn't fun. It has been the biggest fear since I found myself married to someone who's career takes him away some nights. It sends the heart beating so fast and my mind was spinning with reasons why my handle would suddenly jiggle like someone was trying to get in.

Although Africa is large in appearance she is still just 6 months old and does not bark at random noises yet. However, this was an exception. Africa was fast asleep on her bed in the corner, snoring actually. The baby was sound asleep in his crib, and I was probably blogging while sitting on the couch. Faster than the time it took for my heart to drop Africa was off her bed and bolted for the door barking. Not only did the idea of someone trying to open my door surprise me, but the fact that she had that kind of bark in her that I have never heard before really surprised me.

I scrambled for my phone next to me and called 911. After explaining the situation the operator was more than happy to send someone out immediately. I gave her my address and what not and over the course of a few minutes my heart climbed back to its correct position and the blood returned to its normal circulation. I then began to wonder if it was in fact an intruder, or the effects of a windy day. It ended up being nothing (we think), but the point of this is to say

to Africa. You see me complain on here, you see me protest, but this is where I say "thank you".

Who knows what it really was. All I know is that perhaps she scared that person away with that amazing bark. If it was nothing, at least I know that in the future she will do her job, and do it well as a guard dog. Again, you will not have any complaints in this post. We got Africa to love, to keep me company, and to protect. Even as a puppy, I say job well done.
Posted by Kasha at 4:58 PM 22 comments: 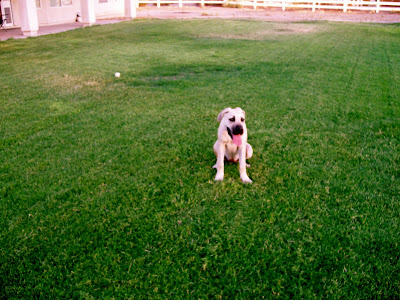 ...and yet you insist on sitting where? 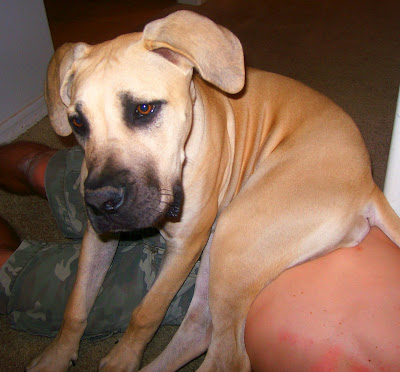 You might be a little dog stuck in a big dog's body. 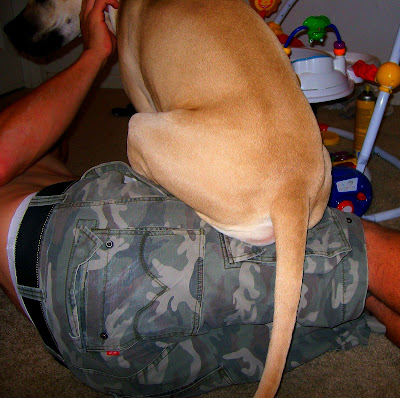 Boerboels love to eat. Here is Africa eating her lunch. Africa never has a nibble now and the rest later. It is always gone within a minute and this occurs three times a day.
Posted by Kasha at 5:55 PM 11 comments:

A Cure for the Kept Wife? 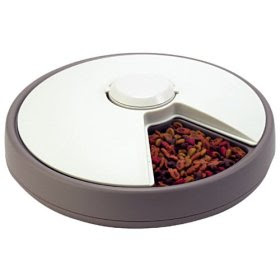 Problem: Not that I can afford to go on glamorous vacations or amazing getaways, but since I have had Dear Son and acquired little BIG Africa I have not been able to go very far because of the dog dilemma. Due to Dear Husband's job if I were to leave there would be nobody to feed Africa for 24 hours. Therefore I never go anywhere, but I would like to go somewhere.

You will see in a future post that Africa eats her food up instantly and would be happy to eat herself to death. Where some people can just leave food out and let their polite dog nibble here and there, Africa would eat it all at once and then starve later.

Solution: I woke up this morning with the most brilliant invention idea. How about a contraption of sorts that contains the dog food and only allows a certain amount to be dispensed at a certain time? Well, my dreams of making millions for said glamorous vacations will forever be just dreams because I googled this idea and it has already been invented.....several times actually.

My question is have you lovely pet owners tried such a thing? Obviously we could get a dog sitter, but I would like to take care of Africa without imposing on other people. What are your thoughts and opinions? If you have tried it what is the best brand?
Posted by Kasha at 9:21 AM 17 comments: