Wordless Wednesday ....what can I say? 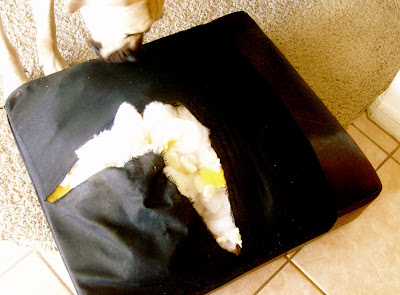 I am back. It turns out I really missed Africa and she missed me. There is nothing like a dog waiting at your door to greet you. She is so willing to love, and I sure love her back. We take each other for granted, so a break every now and then is good. The break however, was not good for our couch. Stay tuned for that picture and please don't wake the sleeping giant. She is so well behaved in her sleep!

It is great to be back! I may get frustrated with this puppy, but I know she is getting better all of the time. Who once said "there are no terrible horses, just really bad riders?!" That goes for dogs as well.
Posted by Kasha at 4:52 PM 20 comments: 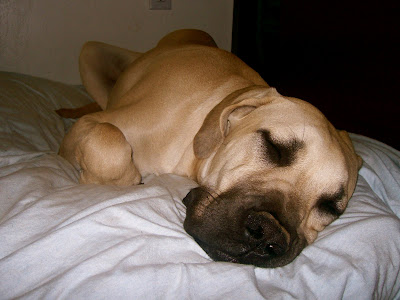 Dear Africa,
I'm sad that we make better enemies than friends. Our relationship has been a bit strained for a while now, but you really did us in the other day. You run away from me now because you think that I am going to force you to take another bath.I'm sorry about that. I had set out to clean the house once upon a time and you decided to dig the biggest hole ever next to the house. You came in caked in mud and tracked it all over the house. I agree it isn't your fault that we picked a house with white carpet, but if you could try to not create more work for me that would be greatly appreciated. 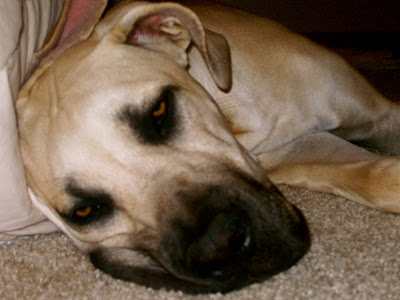 I give you a cool house to lounge around in with plenty of water so I see no need for digging. If you are bored I could think of a few things you could do around the house. I carry treats around and try to coax you into making better choices around me including liking me again. I think you appreciated your cleanliness after the shower so why are you so mad at me? I see you sleeping so sweetly and I can't help but love you. Then I find bits and pieces of the baby's toys everywhere that you have chewed up and I am annoyed once again no matter how cute you are. 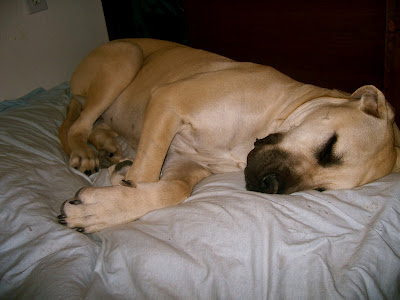 This is probably not the last plea for change, but I promise to keep trying with you. I am grateful to be going on my first little vacation without you. You and I need some time apart to learn to appreciate each other more. The baby and I have not been able to leave the house since we got you, but we have finally found a good home with a friend for you to play with while your lover is at work. I hope things can be different when we get back. I know the baby will miss you tons. I will let you know how I feel when I get back.
Posted by Kasha at 7:47 PM 25 comments:

How Africa Earns Her Keep

The one sure thing that will make our son laugh is Africa. You can rent her out.....for FREE if you want! (I apologize if you can't hear him laugh as well. I had to turn it way up.)
Posted by Kasha at 4:55 PM 12 comments:

Caution! Floor may be slippery when wet

We interrupt the regular mishaps to bring you an extra embarrassing mishap. The neighbor came over to ask us donate to his son's school project. Africa decided to sneak out from behind the cracked door to make her own donation on his foot. I have researched the reasons a 7 month old puppy would still be peeing when excited. It seems that she needs more confidence, (she seems pretty proud of herself so I doubt it) or she needs more socialization with less attentive visitors. Has anyone experienced excited peeing with their puppies? She will grow out of it like our first puppy right?
Posted by Kasha at 8:50 PM 11 comments:

This would be fun to see! Enjoy if you haven't seen this already!

The Mysterious Death of the Neighbor's Dog 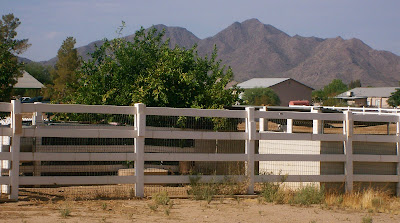 Africa is now down to one best friend. Every morning Africa would go and sit next to this fence enclosure to see her friends: Lola and Bruce. While we were away on Vacation it seems that Lola suddenly died. We are friends with our sweet neighbor's and wonder what happened. Lola and Bruce are mastiffs. Lola was the younger of the two dogs and it came as a sad surprise that she died so suddenly.

According to the neighbor's they left Saturday in the morning with two very healthy dogs. Approximately 3 hours later they called their son who remained at home with the dogs and reminded him to go out and spray them with water as it was very hot that day. He immediately went outside and discovered Lola no longer alive.

Bruce is still alive, but appears to be very ill. He has a swollen ear and an infection, but the neighbor's are not divulging as to what kind of infection he has and how it all relates to his companion's death. We are happy to see that since he is not feeling well he gets to get out of his hot living space and now resides on their shaded patio with a little pool.

Although we love the people next door we felt that they could of provided a better living space for these poor dogs. It is around 115 degrees outside. I know they had plenty of water and care, but it makes me wonder how this could happen

We are concerned what caused this and if Africa can get it. Their guess is scorpions, a rattlesnake, or the heat. Do you have a guess as to what happened to beloved Lola? 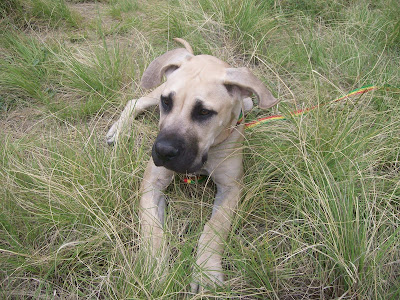