My Kind of Vacation 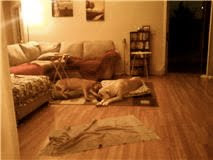 This is Africa hanging out with her B.F.F., Leo, while we took a trip to Wyoming for a family reunion. Some like to lay around the house, and some like to almost die on airplanes.

Things you never want to overhear your pilot say is " we got REALLY lucky that this happened so close to an airport with a long enough runway, the weather was good, and we were able to land as quickly as we did"


Our flight from Billings, Montana back to Mesa started much like the journey to Montana from Mesa. Our pilot was the same, our flight attendant was the same, and now we wonder if the plane was exactly the same as we thought the right side engine was extremely noisy on the way to Montana. If it was the same plane on the way back there is a good reason as to why the engine was so noisy. 90 minutes into our flight the side of the plane that we were on took a sudden dip to the right and a loud pop followed with a steady hum. We didn't think much of it until our flight attendant answered her phone which was next to me and after listening intently hung up and started telling us to clear the aisle and make sure our seat belts were fastened. Josh joked about there being something funny about the engine we had been questioning and we laughed. There wasn't any concern as the stewardess was very calm. As the turbulence ensued she then stated that one of the engine lights came and on and they were just checking on it. The turbulence worsened and the lights flickered. The flight attendant stumbled back to the phone and as she answered it her face changed.

Suddenly the tears came and I started sobbing. I wasn't hysterical, but quietly sobbed as I suddenly had that feeling that something bad was about to happen. I was looking at Jack sitting calmly on Josh's lap. Eerily calm as he had been a bit fussy up until that point. Josh was super calm and wise to tell me that it was totally fine. The flight attendant said that we might have to land and that everything was going to be OK. I panicked and looked at Josh and he said of course they have to land this is just a routine check on the engine. It helped to hear that, but the sudden free fall we took after that did not help. There was more shaking and diving and then a sudden feeling that someone had slammed on the breaks. I looked out the window and did not see a runway but rather the grand canyon. That didn't seem like a good place to land so tears kept coming. I was thinking of my Jack and how vulnerable his little body would be if it got any worse. I was thinking of my little .5 baby ( or 1/8th according to Josh) and if it could handle this "excitement."

I watched the flight attendant pulling out the sample oxygen mask to give us another lesson and then tell several men around the exits what to do when we land. She was speaking quickly and kept repeating the importance of hurrying. The tears kept running down my face as I watched two other flight attendants giving the same instruction to those around them. Then I said a prayer. I wasn't asking to be saved, but rather that Jack would not be hurt. I really didn't care if Josh and I had to die, but I just didn't want that little body to be hurt in any way. I guess I was just thinking this isn't really happening, but I was grateful for prayer and the fact that I felt so much better even though my surroundings were worse. The good news was I could see Flagstaff. The bad news was it seemed like there was too much going on to be able to land where we should when we should. The pilot did a great job landing. It was bumpy, it seemed like the plane was never going to stop, but it did.

It stopped awkwardly in the middle of the runway and everyone held their breath wondering what it all meant. We were told to unbuckle our seat belts, but remain seated. Suddenly the flight attendants started yelling "evacuate, evacuate" "leave everything behind." The flight attendant was not calm and therefore neither was anyone else. Everyone headed to the closest exit. Ours was the rear exit. The flight attendant told us to hold our children and hurry as fast as possible. I looked at Josh who seemed still very calm, but also quick to move with Jack. The few ahead of me went down the rubber slide and did not land properly at the bottom. The slide was so steep that instead of hitting the bottom at a run like they should, they landed on their face and every other body part. Every body part, but their feet. Once at the bottom there were several fire trucks and ambulances. The firefighters told us to run to the fence as quickly as possible. I went down the slide and waited for Josh to follow with Jack. Based on what was happening around me I was certain Jack was going to fly out of Josh's arms and I wanted to try to catch him. Josh landed perfectly and handed Jack to me as he turned to help stop the others from landing so dangerously. I headed off the runway and to the fence as they kept telling us to hurry.

Around me people were crying and firefighters were running around asking if we were OK. The flight attendants were still telling people to hurry and get off. As a result the passengers were hurrying and not waiting for others to move out of the way before heading down. After the rear passengers were down the slide, Josh went to one of the wing exits and helped people jump. They didn't have a rubber slide and were just jumping off. Some poor girl was heavy enough that nobody wanted to help her jump so Josh sacrificed his back and told her to just jump and he would help break her fall. We were then told to head to the airport. I could see the engine. It was very black and still smoking.

The flight crew reported that there was a fire in the engine. The built-in fire extinguishers went off and they thought it was out, but once we landed the air tower told the pilot that they could see the engine appeared to still be on fire and to evacuate immediately. There was a few people transported to the hospital for leg injuries and what not. The news reported 3 injuries, but there were several injured minor or not. They couldn't move the plane to land a new plane for us so almost 7 hours later we boarded a bus and finished the rest of the journey to Phoenix. Everyone was a little jumpy as the bus hit bumps and turns. Clearly the plane trip was fresh on our minds.

Maybe next vacation I will spend it sleeping on a giant dog bed too.
Posted by Kasha at 7:06 PM 13 comments:

I have one human baby and one furry baby. The human baby proves to be quite tricky to raise. Africa has pretty much grown up into a very chill dog. For anyone interested in a good read to help you in the journey of parenthood, I would recommend Parenting with Love and Logic. I am loving it. However, it turns out you are never done being a parent. Irony is leaving a book about "love and logic" out for the dog to destroy. That was not very loving or logical was it? So the journey continues minus one book. I probably learned more from the consequences of leaving the book out than the actual content. Lesson learned Africa! 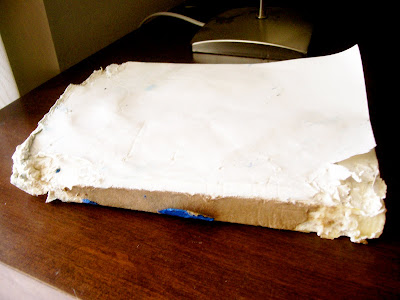 Wild Thing, I Think I Love You 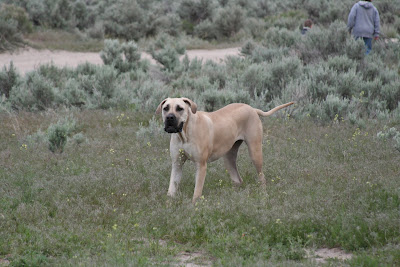 130 pounds and 130 degrees outside. Not really on either account. She is probably more than 130 pounds and I think it has actually been a nice cool 105 degrees. What is a poor girl to do in this weather? Sleep, sleep, and more sleep. Life is pretty boring around here. Here in Az we make like bears and hibernate through the summer. Unfortunately I don't stop eating so when winter does hit I will have warm padding. Everything is cool (not literally) with us, how about you?
Posted by Kasha at 9:58 PM 10 comments: